As many of you know, I am involved with litigation relative to VCU. I have refrained from public commentary out of respect that I hold for the administration of VCU and my own constraints relative to publicly discussing matters of this kind.

Earlier this year, I filed a Whistleblower lawsuit alleging discrimination and harassment of a woman employed by VCU, as an assistant in my office, against the former dean, John Accordino, of the L. Douglas Wilder School of Government & Public Affairs and the authorities associated therewith. I did so because I felt that I knew VCU’s commitment to justice and fair play would not tolerate or abide actions contrary to that commitment, which proved to be clear and unambiguous. The entire incident was overheard by a professor who emailed me the details of what she witnessed. I then consulted with the employee and asked her if what the letter contained was correct; she said it was correct in every detail. I did not immediately forward this to the authorities but subsequently did alert the necessary parties at VCU and asked them to investigate the probity of the allegations and complaint.

I was forced to file a formal complaint and demanded an outside investigator because the internal investigation by VCU proved to be tainted and unfair. I was not allowed to see the final report, although I am the complainant, and made that known to the authorities when I first met with them. I called the Virginia Attorney General who is charged with the responsibility of legally representing state colleges and universities. He told me he would inquire as to why it was determined that I should not receive a copy of the report; however, I’ve heard nothing further from him.

Since the filing of my complaint, VCU has caused Accordino to resign from his position as dean; I have filed a voluntary non-suit of the litigation, which under the law, I can reinstitute or file new litigation. But the question that people continue to ask, “why was John Accordino, the former dean, permitted to file this countersuit against me for interfering with his contract?” It is also worthy to note that VCU, a state institution funded by Virginia tax payers, has awarded the former dean a contract of hundreds of thousands of dollars. He is on paid “study/research” leave, all travel expenses paid, and is scheduled to return to VCU as a tenured professor in the fall of 2019.

Many of you have inquired as to how such conduct by the former dean, who was asked to resign by VCU for cause, could rise to this level of litigation against me, causing me duress, emotional stress, untold legal expenses, and needless expenditure of time and energies.

I have dedicated my entire public life fighting for the rights and fair treatment of all Virginians. I will continue to fight this fight for those whose voices may be stifled and afraid to speak out in fear of retaliation and violation of their civil rights.

I am humbled and grateful for the outpouring of support that I have received. My participation in government and public affairs has never been about me. I will continue to demand what is right and criticize what is wrong. And the truth will out! 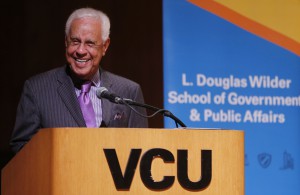 I was pleased to host the 2018 Wilder Symposium “By the People:…
About the Author More information on Son of Virginia, the autobiography by…